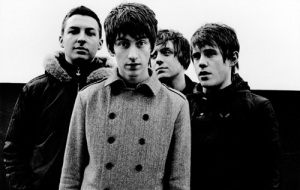 Adolescence – as I remember it, and certainly as it is reinforced and transmitted by our culture  – is about urgency. The highness of stakes. Fear of phoniness, of loss of face and the fragile esteem it brings. It is about the fear of being humiliated above all, and therefore transformation of that fear into anger toward those with the power to humiliate you. It is strong stuff.

By these lights, Arctic Monkeys’ 2006 album Whatever People Say I Am, That’s What I’m Not might be the most adolescent album I have ever encountered. The album is bookended between two observations: that “anticipation has a habit to set you up for disappointment,” and that with those you truly love, “you just cannot get angry in the same way.” The first is made at the beginning of the evening, as the speaker is preparing for a night out – or a weekend out, really, that will close only in the dead-eyed light of an exhausted Sunday. And while the first dismisses all the mad searching that will come as futile before it’s begun, the second settles with acknowledging the quieter but more reliable satisfactions of at least having companions for the journey. We won’t find what we are looking for – but at least we’ll be on the mad, pointless hunt for it together.

What is the search for? That’s the album’s arc. The speaker searches for pleasure, yes, but more for the connection and completeness that pleasure should bring. Our lads are running from the fear that it won’t satisfy even as they are running toward it as hard as their legs will carry.

The music opens way for these explorations. There’s a willingness throughout to keep singing even after their (many) words fail, a fresh dipping into those glossalics (“na-na-na”) that the pop tradition has used to voice inarticulateness since Phil Spector. There is a willingness to let guitars sound like guitars, in Gang-of-Four slashes as well as slabs of Sonic Youth feedback. There is such humor in these songs! Listen to Matt Helders’ drums and imagine every cymbal crash as a “yeah!” and you’ll hear what I mean. No one since Keith Moon has shared as much clownish energy from behind the kit, been as involved in commenting on the song’s proceedings as much as keeping the time. Above all there is a lightness to these songs, a deftness with which they turn corners and cut out and pile on all together, amounting to a twitchy energy by turns neurotic as early Talking Heads and as playful as early Joe Jackson.

Those records (Fear of Music, Look Sharp!, Entertainment!) are this one’s aunts and uncles, but its grandfather is beyond a doubt Quadrophenia. That was the last time a band so fully took on youth’s anxiety to make itself through affiliation – the last time rock and roll so effectively captured the satisfactions and crushing defeats that follow when youth entrusts its self-image to the wrong things and the wrong people. There are differences, surely: for one, the parents and other adults whose sham values haunt the mod’s flight into his own culture are largely absent in the “chav” culture the AM’s describe. There’s no parent horrified at what their kids are doing and wondering “did anyone see you there?”

But there’s no observatory showdown either, no frontier justice other than border skirmishes. It’s just them and their insults and disses; they are each other’s judge and jury, not combatants. The effect, though, is one of intensifying fear rather than lessening it, raising the stakes rather than lowering them. Neurotic obsession with others grow and metastasize, complete slight or affirmation in issues as insignificant as whether your mates assent to jump a cab fare or whether someone confesses to pretending to forget your name a year ago.

But holy cow, can they talk about it. In this, Arctic Monkeys’ differ from Green Day, who dropped their own rock opera in 2004 about disaffection and seeking something more satisfying. It’s been noted that, for that album’s protagonist, inarticulateness is part of the point: raised on soda pop and Ritalin, those kids don’t have much to say. Tempting to say that the AM’s made the record Green Day thought they did. As was once observed devastatingly about Chuck Mangione, “they hear more than they play.”

Here, though, we have an album full of obsessively cataloged discontent, where the specificity of reference is part of what makes the rage so effective. It is targeted: at the good-looking girl who won’t give enough attention, at the better-looking guy who gets in your way, at the perceptiveness of the bouncer who realizes you and your friend switched shirts to try to get by him, at the band affecting to be from California when we all know they are from up the road. Urgency can heighten the senses, or dull them. Here, senses are keen-edged and on fire.

Until suddenly, it isn’t: until, in a flash, clarity becomes muddy again. What you think you got, you suddenly realize you didn’t get, as they note in “From the Ritz to the Rubble:”

Last night, what we talked about, it made so much sense

But now the haze is ascended, it don’t make no sense anymore.

For teachers, the record serves as an evocation the youth we spend our lives with, of how high the stakes always are when you have so little experience with which to reckon them. I am grateful to be reminded of what else is in the water when I teach, the turmoil that might have been brought in from the hall or the home, the lens through which whatever I am offering might be viewed. It’s a call to authenticity, above all – a bright line connecting Holden to Ben to Jimmy to Alex, right here and now. It reminds me, whatever else I do, not to be phony. Because if I am not, I have a chance to be a companion on the journey.

What do you think?

First, I attributed my quote to the wrong song; it has been corrected.

More egregiously, I associated the AMs with “chav culture” thoughtlessly and ignorantly. Further research suggests they are considered more an “indie” band, or even a “chindie” band, because their take on the “chavs” is more ironic than anything. Hard to understand these distinctions from across the ocean. Happily, I learned this week that I have a student this semester from Sheffield who went to school with some of the band, so I hope he’ll set me straight.

More importantly, I was ignorant of the perjorative socioeconomic implications of the word. I should not have been: If Dick Hebdige taught us anything, it’s that youth subcultures cannot be separated from the social conditions they grow in (Richie Cunningham couldn’t cruise the strip without a car, gas, and cash for cheeseburgers; Johnny Rotten couldn’t sneer “God Save the Queen” without the backdrop of the over-the-top Silver Jubilee celebration that made a mockery of the poverty of so many Britons). Of course the way that youth subcultures get stripped of their intimate connections with socioeconomic status, race, ethnicity and other factors and sold back to us is a factor here too.

And the critique of my structuralist assertion that it is even possible not to be “phony” (i.e., NOT to slip between what you say and what you think you mean) will have to wait for another day. But I hope you get what I mean.

I am Professor of Leadership & Educational Studies and Associate Director of the Doctoral Program in Educational Leadership at Appalachian State University. View more posts